Today the folks at Benefit launched their awesome new Fake Up concealer. Earlier this week I blogged about the launch party where I learnt about what sets Fake Up apart from other concealers, and after putting all three shades through their paces over the last two weeks I thought it was about time I reviewed them.

I love the way the cardboard packaging reflects the different shades. If I were being pernickety I’d like the actual bullets to also be slightly different shades so it were easier to differentiate which shade is which when they’re in my make up drawer, but realistically I’m not sure how many people will go out and buy all three shades so I doubt this will be an issue for many people.

Fake Up comes in three shades, Light, Medium and Deep. Light works great for my pale and pasty skin but I think Medium and Deep may lean a tad too orange, even on darker skin tones. Hopefully in time they’ll introduce more shades to the range. 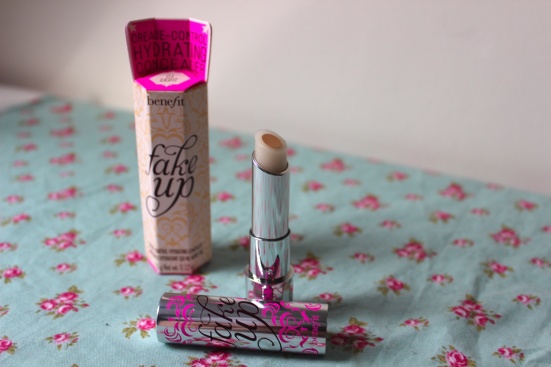 Recently I’ve been using the Light shade on my under eyes to hydrate and brighten the area and then either Medium or Deep to add contour to my face. I’m generally pretty terrible at using eye creams to keep the delicate skin around my eyes hydrated, so I love the fact that the Fake Up concealer hydrates my skin whilst also minimising my dark circles.

But what makes Fake Up stand out from other concealers? Well it has to be the hydrating ring that the concealer is suspended in. Containing Vitamin E and Apple Seed Extract it ensures your skin remains hydrated leaving you completely cake and crease-free! Admittedly when I first heard about this I struggled to understand how this concept would work with a concealer, assuming the outer ring would make it difficult to apply or leave my skin greasy, but it’s actually so so simple! Just swipe and go. 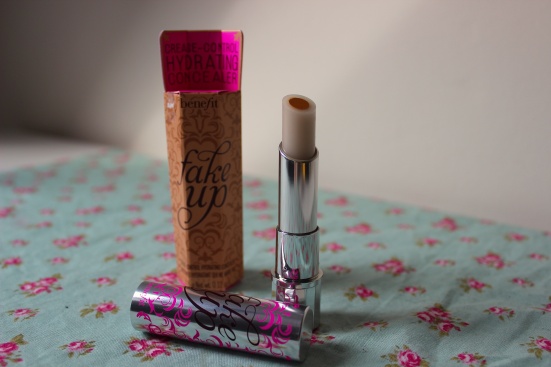 I’m currently dying of Gem Flu but will pop up some swatches as soon as I can bear to be out of bed for more than a few moments.

Ultimately I have been hugely impressed by Fake Up and the fact that it has quickly replaced my Perricone MD No Concealer Concealer as my day to day concealer, which is no mean feat! Unlike most concealers it doesn’t sink in to my under eye creases and the fact it doubles up as a highlight/contour shade makes it the perfect concealer to throw in your overnight bag when travelling. At £18.50 it’s not super cheap but doesn’t break the bank either and I’m almost certain I’ll be repurchasing when this runs out.

Have you tried out Fake Up yet? Would love to hear what you thought of it if you have.

One thought on “Review – Benefit Fake Up Concealer*”

Just a digital girl in a digital world.... blogger and obsessive bride to be. All views are my own.

DISCLAIMER: Any items marked with an asterisk (*) have been sent/gifted to me for PR purposes i.e. product reviews and features. Full details of this can be found here.